The name In-Plane Switching comes from the crystals in the cells of the IPS panel lying always in the same plane and being always parallel to the panel’s plane (if we don’t take into account the minor interference from the electrodes). When voltage is applied to a cell, the crystals of that cell all make a 90-degrees turn. By the way, an IPS panel lets the backlight pass through in its active state and shutters it in its passive state (when no voltage is applied), so if a thin-film transistor crashes, the corresponding pixel will always remain black, unlike with TN matrices. 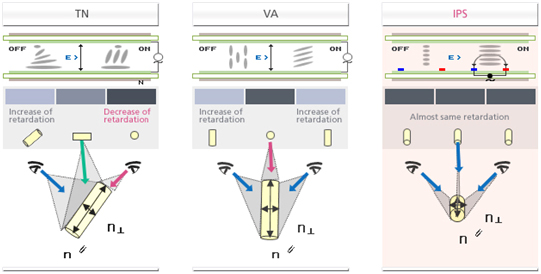 IPS (In-Plane Switching) displays provide consistent, accurate color from all viewing angles without blur or grayscale inversion. IPS displays show clear images with fast response time, and no halo effect is produced when touched. Each pixel within an IPS type TFT consists of three sub-pixels (Red, Green and Blue). Each sub-pixel has a pair of electrodes to control the twisting of the Liquid Crystals. Unlike TN type TFTs where the electrodes are on opposing plates, the electrodes in an IPS TFT are on only one of the glass plates (i.e. in the same plane). When voltage is applied to the electrodes, all the Liquid Crystal molecules align in parallel with that plane and allow light to pass through to the polarizers and RGB color filters. In effect, TN displays force the Liquid Crystal molecules perpendicular to the glass which blocks some light from coming out at wide angles, while IPS displays keep the Liquid Crystal molecules in line to allow light through at all angles.
Previous :
LCD display technology--LTPS display
Next :
LCD display technology--MVA display